X-Form Art Exhibition grew out of the idea of Aslı Sinman Kutluay, the daughter of Prof. Sadrettin Sinman of the Department of Electrical and Electronics Engineering, ODTÜ, who passed away in 2015, to gift to the department her installations, ‘Little Girl in the Footsteps of a Scientist’, she created using materials from Prof. Sinman's experimental fusion laboratory.
Head of the department, Prof. Tolga Çiloğlu suggested a possible broadening of the exhibition to include works by using obsolete, leftover, old materials from the department as an artist-designer and artist-engineer coaction to transform the department into a more creative and inspiring space.
Eventually, X-Form Art was opened on May 16, 2019 as an interdisciplinary exhibition dedicated to the memory of Prof. Sadrettin Sinman, displaying the works of his daughter Aslı Sinman Kutluay, a graduate of the Department of Industrial Design, ODTÜ, and the works of Ahmet Güven, a graduate of the Department of Electrical and Electronics Engineering, ODTÜ.

Sine wave has a magical meaning in the field of engineering. French physicist and mathematician Joseph Fourier expressed a periodic function as an infinite series of sines and cosines. So, a wave actually contains an infinite number of sine waves. This analogy is the main theme of the exhibition. That, art is an intersection of a multitude of disciplines and ways of reasoning…
In this exhibition, interdisciplinary intersections, namely ‘art’ and ‘engineering’, produce new forms and ways of thinking.
The conception and language of the exhibition was created in accordance with the architectural structure of the department. In this respect, the exhibition can be seen as a ‘site-specific installation’ or an ‘architecture-specific installation’ exhibition; on the other hand, it is an example of the ‘repurposing of e-waste through art’.

The exhibition spreads over the ground floor, stairwell, entrance and two intermediate floors within the framework of its fiction.
At the ground floor, in the center of an octagon is the New Sculpture (New Colossus), opposite to it is the Humanity 4.0 and Stalagmites, forming a fictitious cohesion.
Some instruments and devices of the third industrial revolution encircle the flawless, but acephalous torso of Milo Venus to form ‘New Colossus’. On the sides, overhead projectors reflect Leonardo Da Vinci's Vitruvian Man, and below them runs an old computer game for home users drugged by computer games at the end of this era.
Across is a clime of war, the other pole of the human dilemma; ironically, it takes the form of a rocket with ‘Humanity 4.0’ printed on.
Advanced design red stalagmites; they illuminate the color of the future, as if foretelling the dire course.
The placement of the ‘duo-bike’ utopia suspended in the stairwell, just above and targeted by the Humanity 4.0 rocket; at the upper level, of the motto-work ‘go-basic’ that we should resort to for solving problems, and of the ‘Tesla Mind’ as a guide mind; at the intermediate levels, of the ‘electronics alphabeta’ and of the ‘insect wall’ bearing postmodern references to ancient cultures, is not a coincidence.
That it is the childish imagination as a basic merit not to be missed is reminded to us by the ‘little girl's monsters’ section at the ground floor. 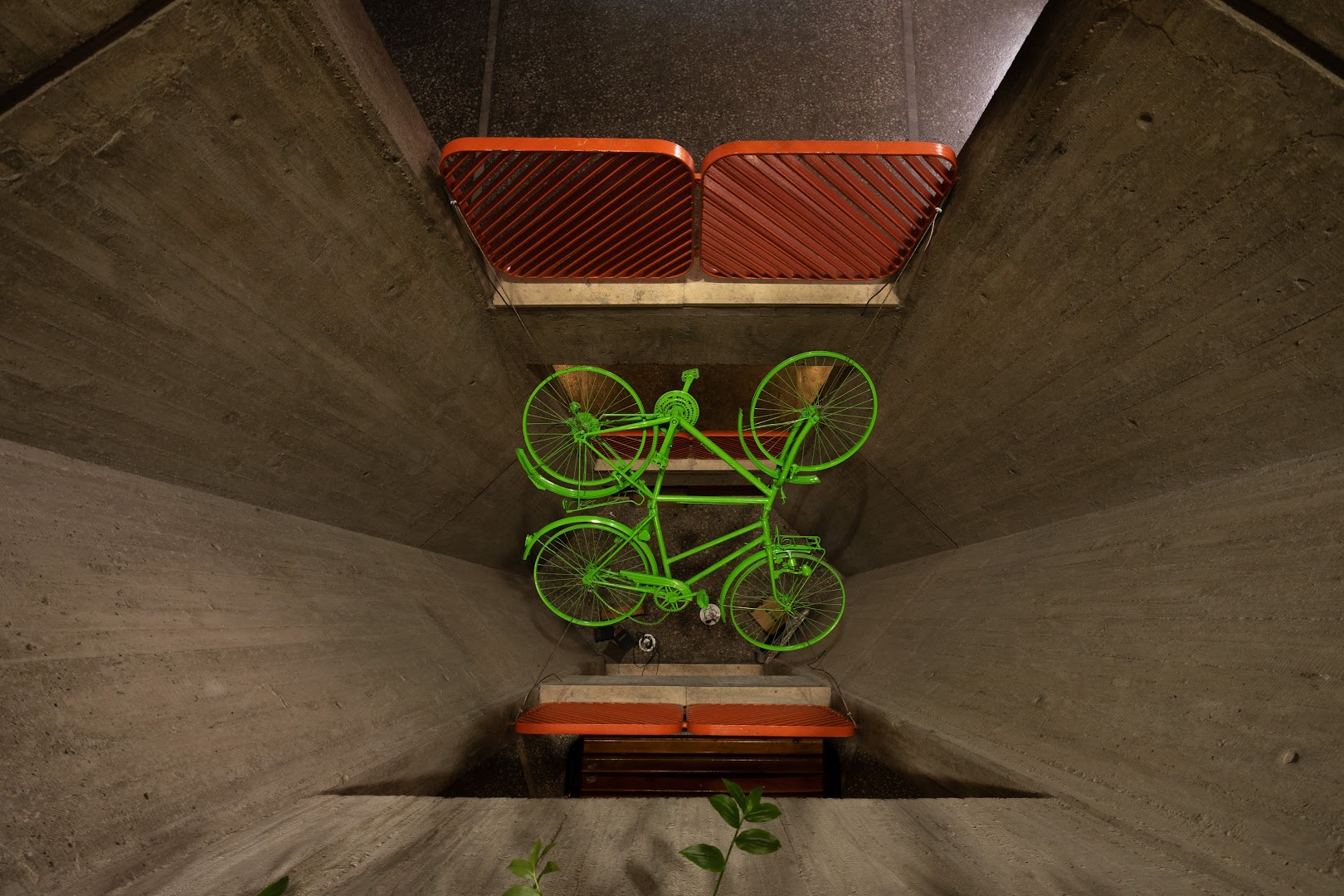 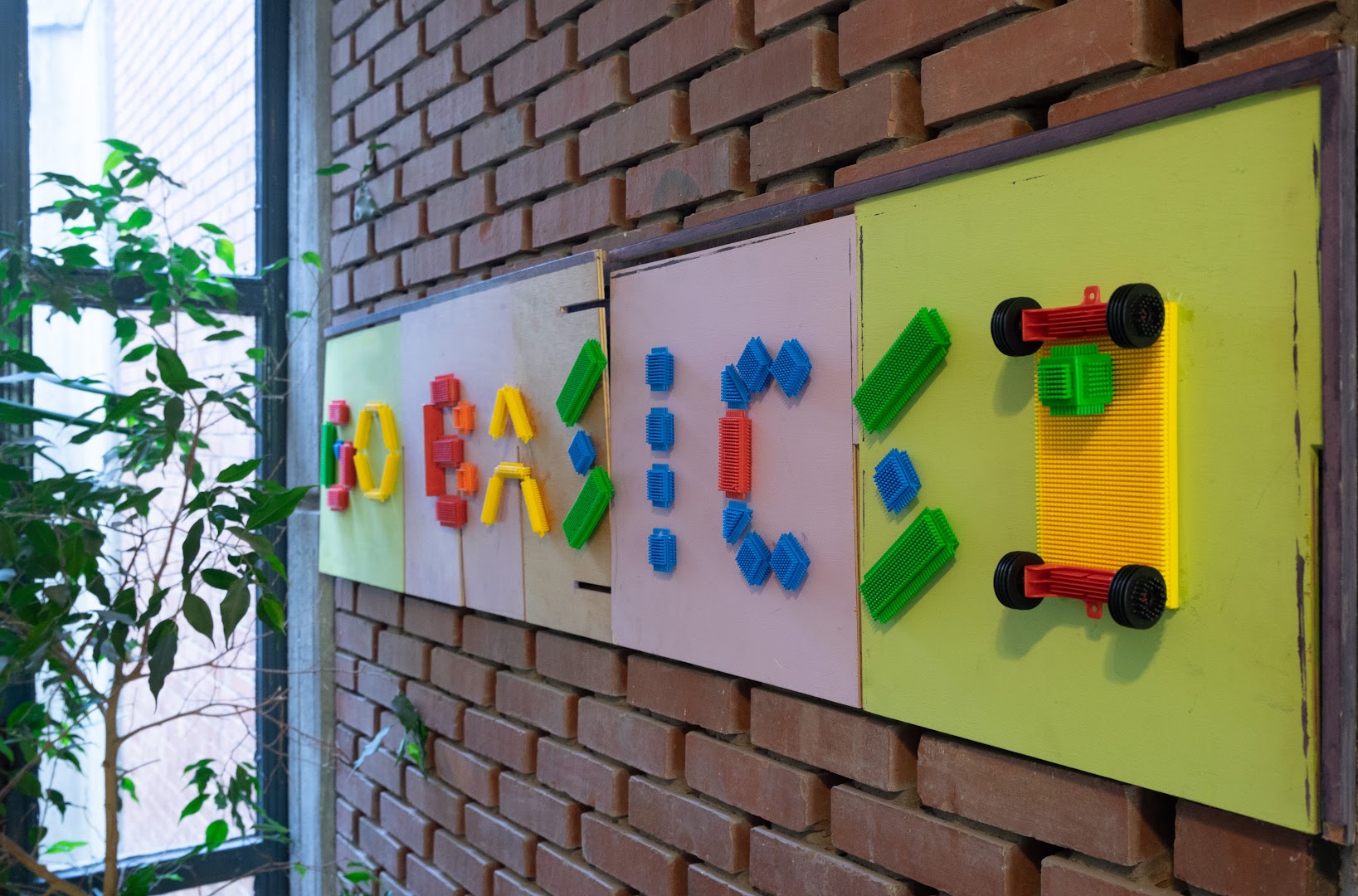 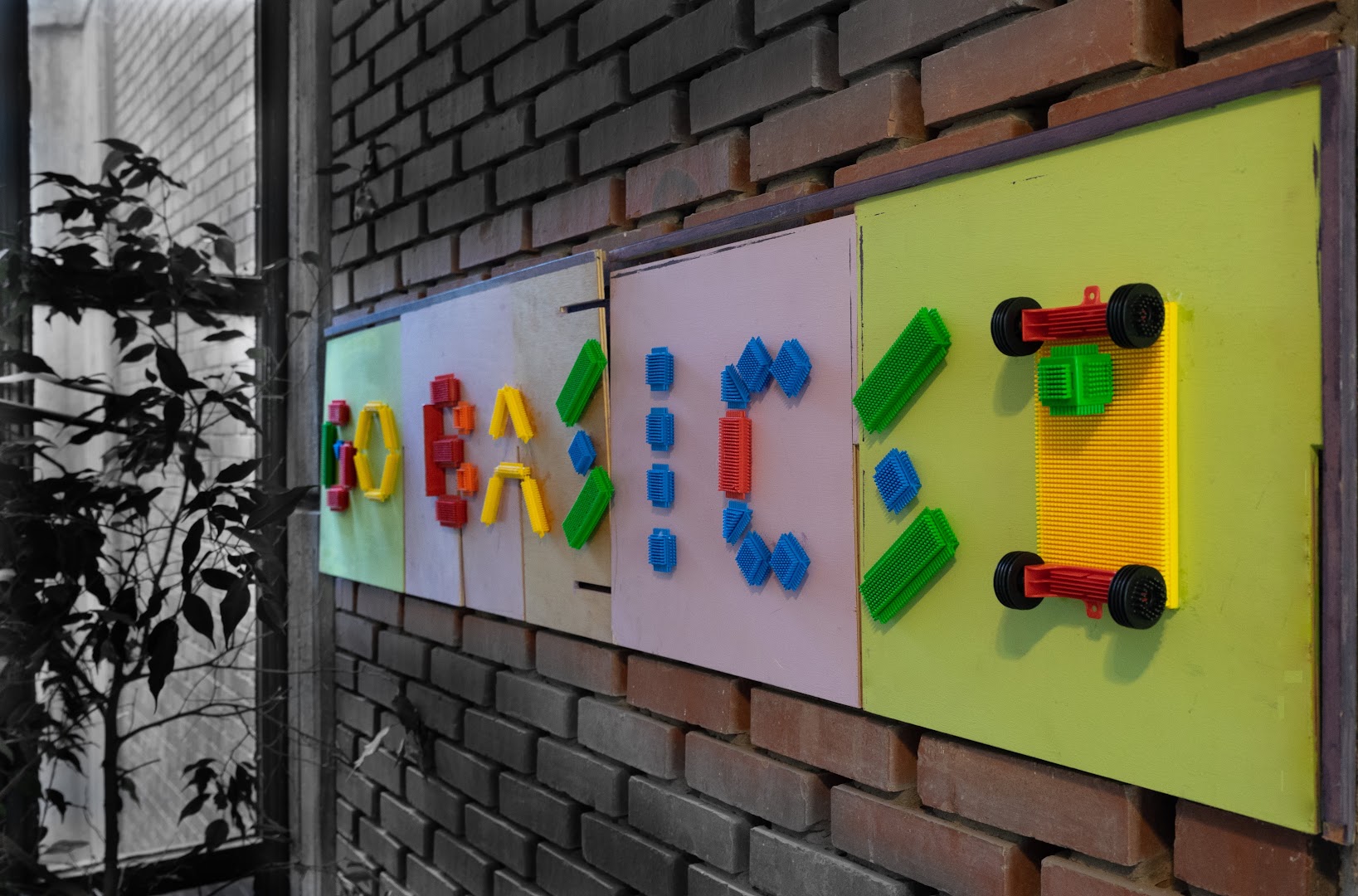 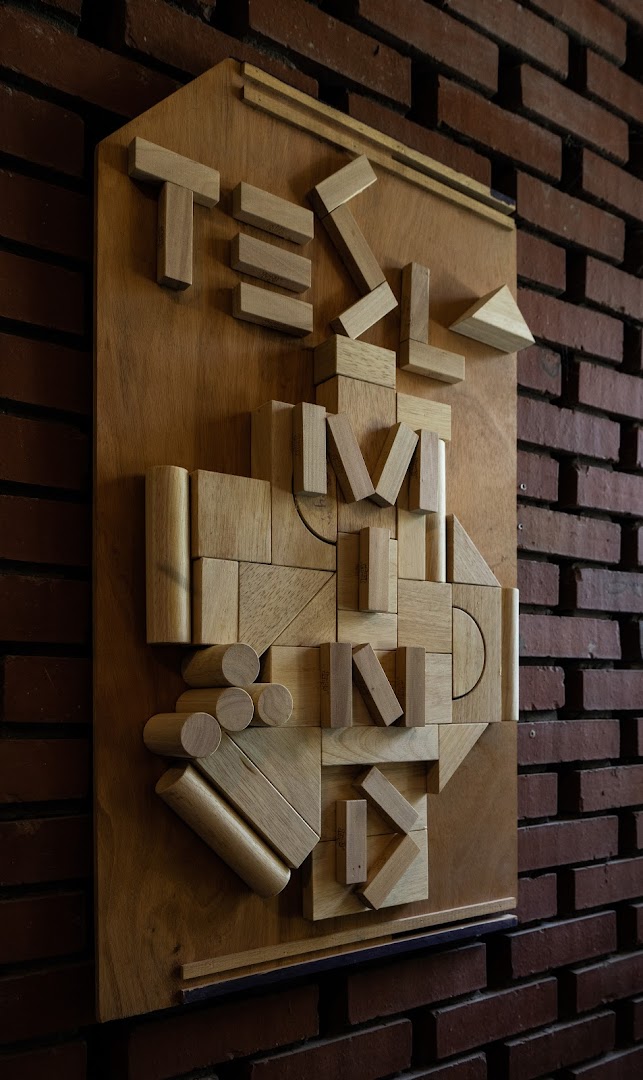 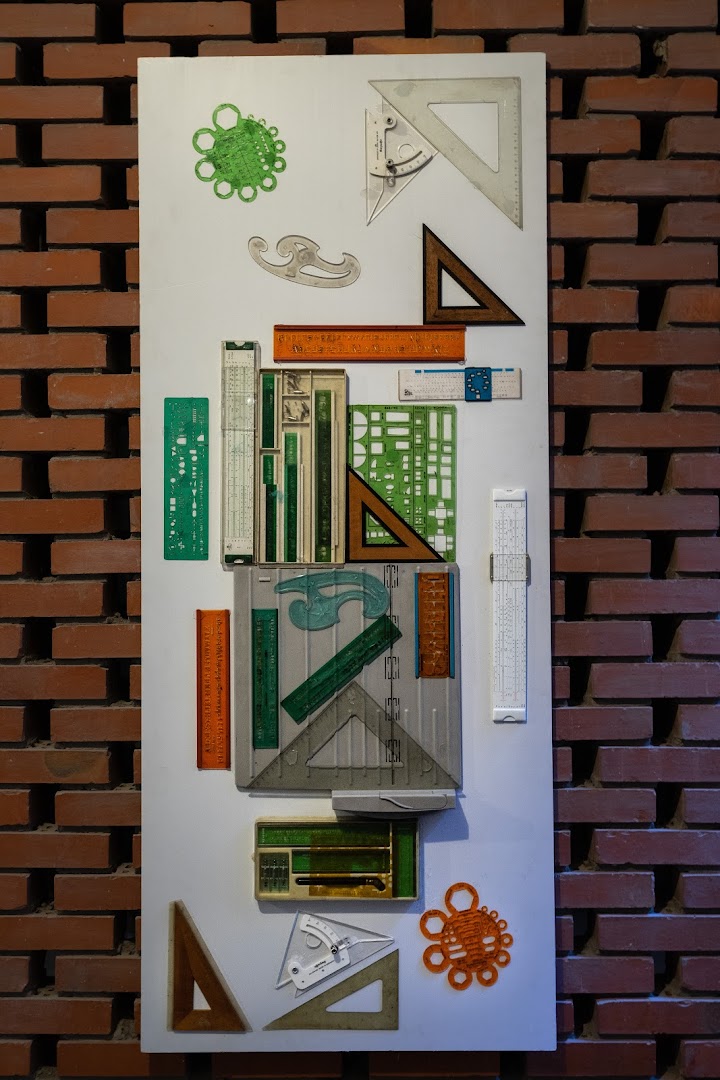 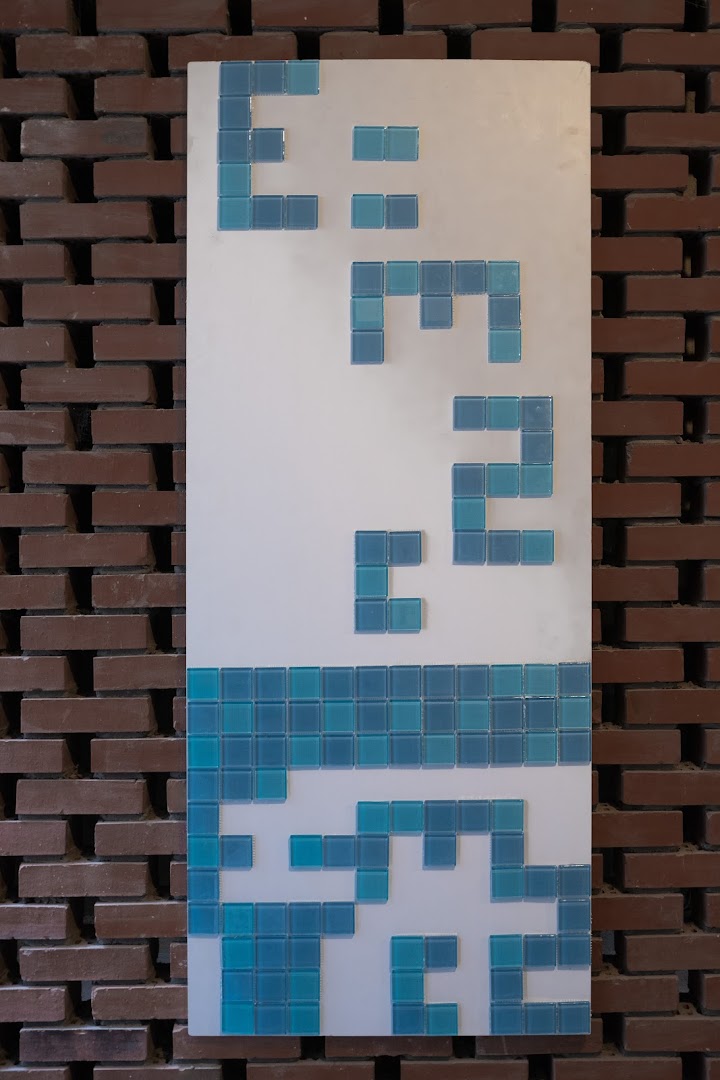 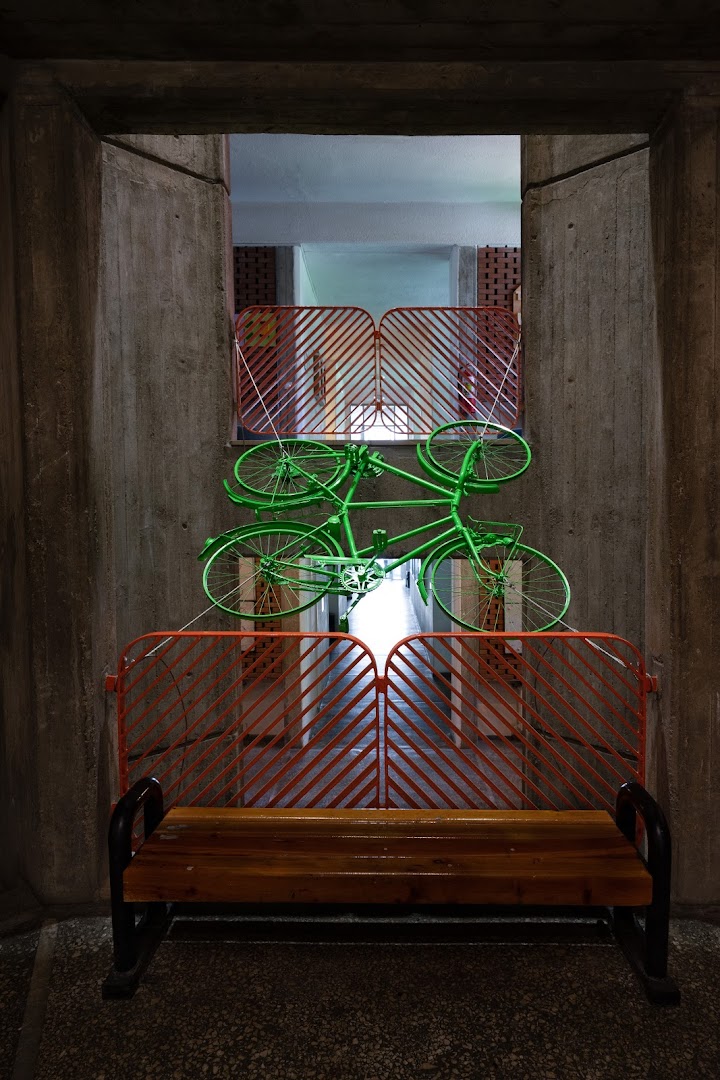 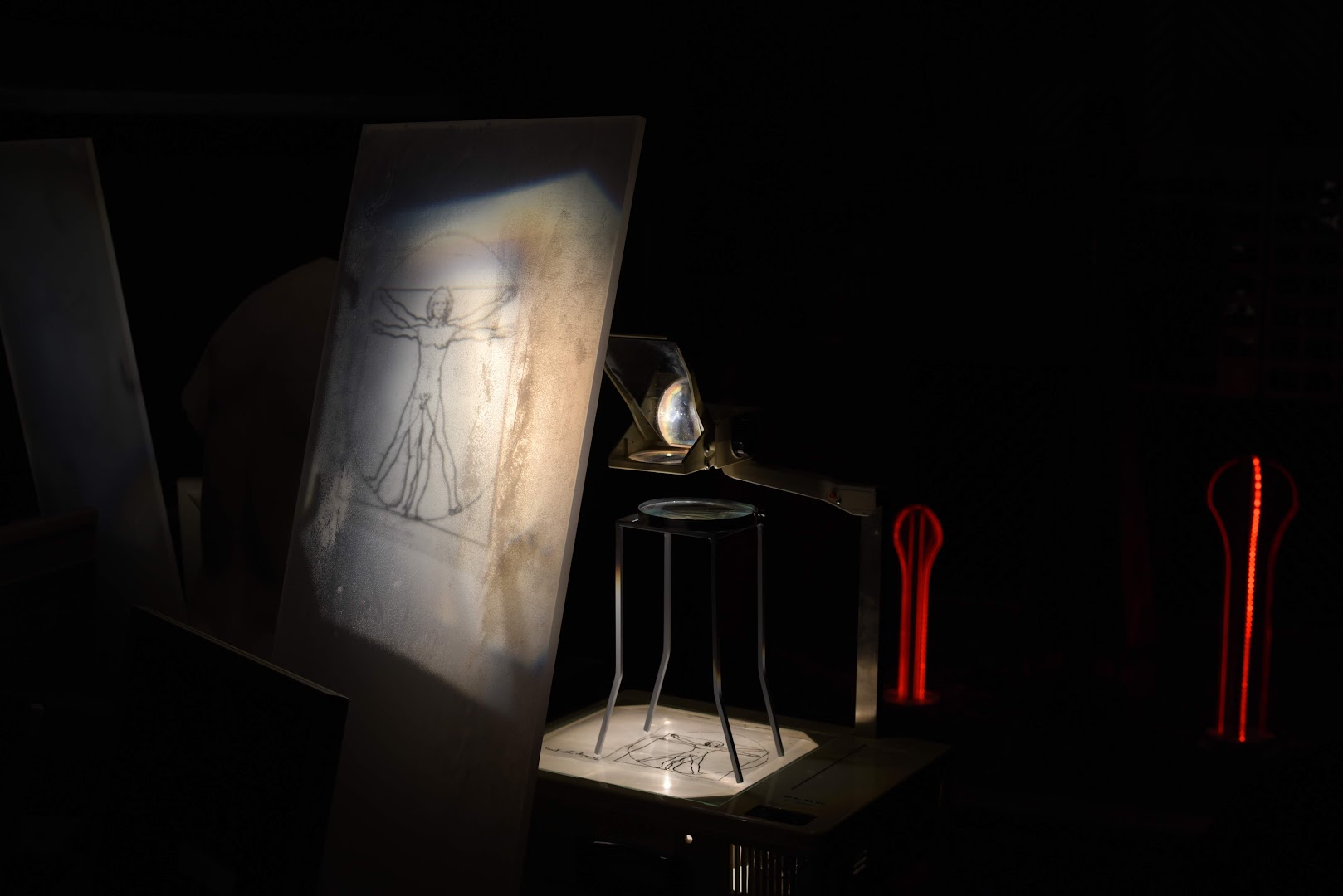 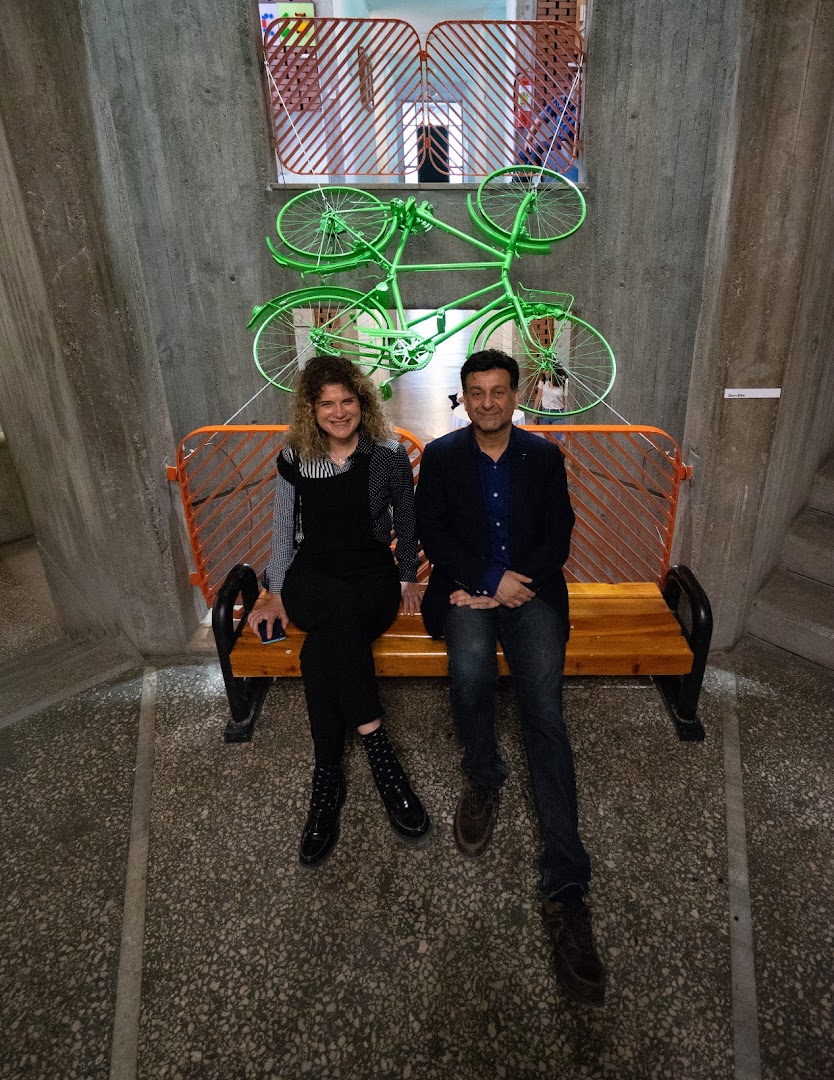 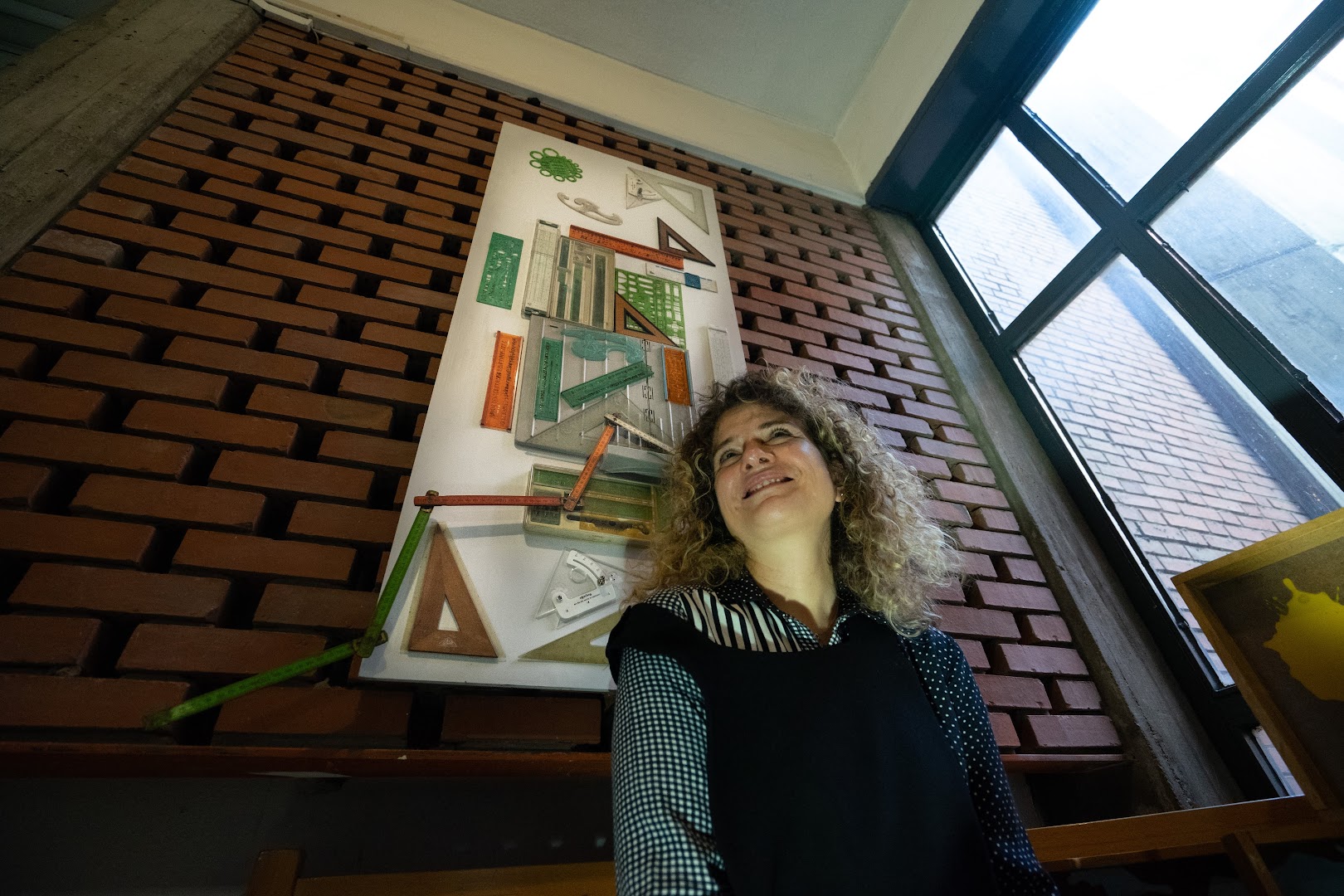 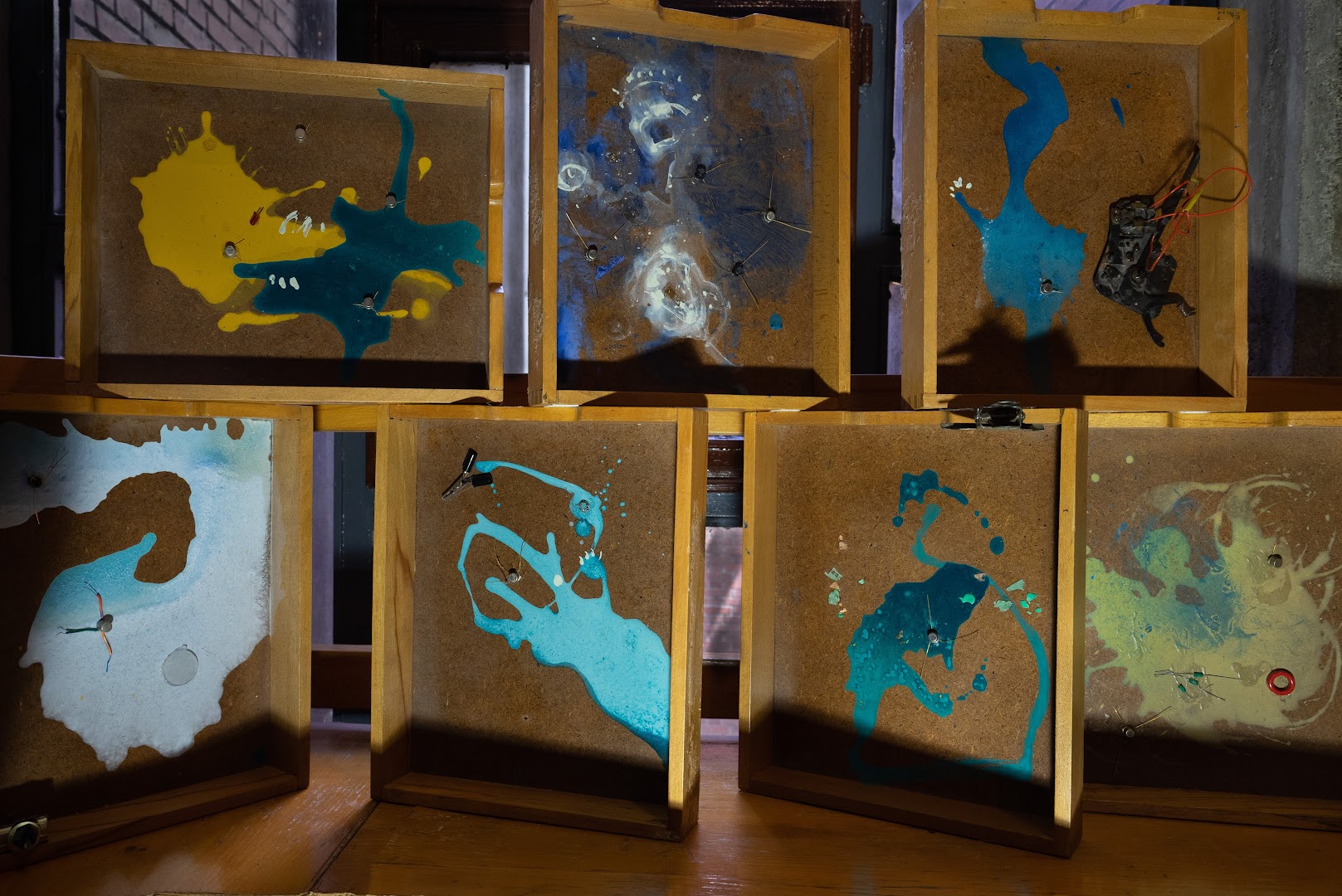 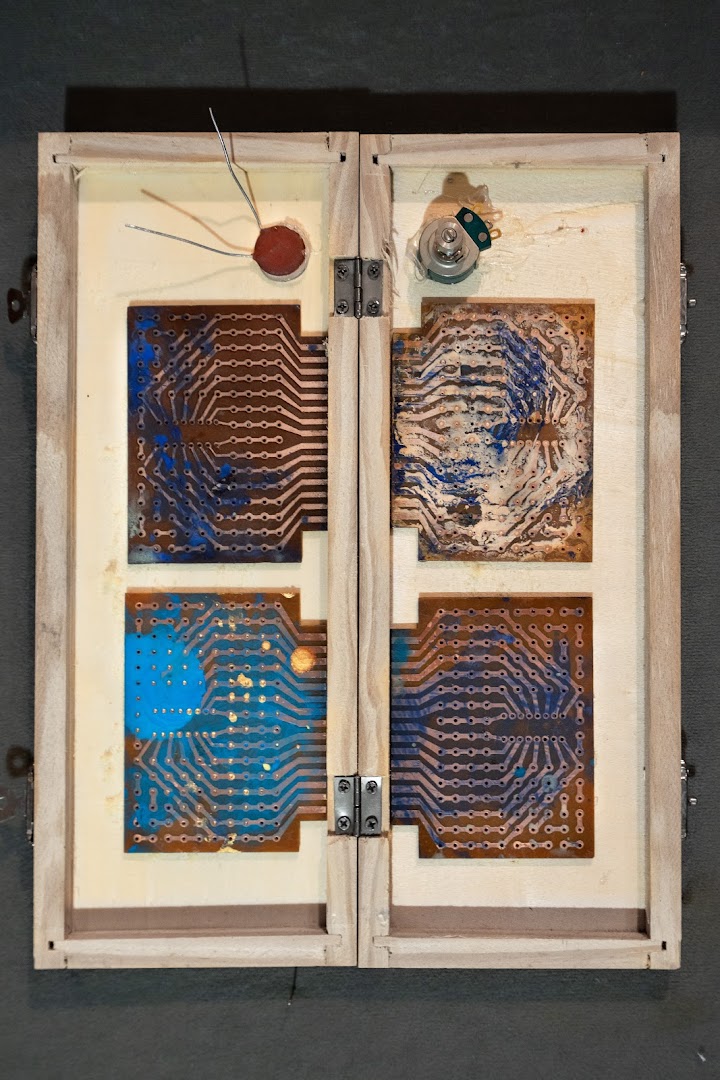 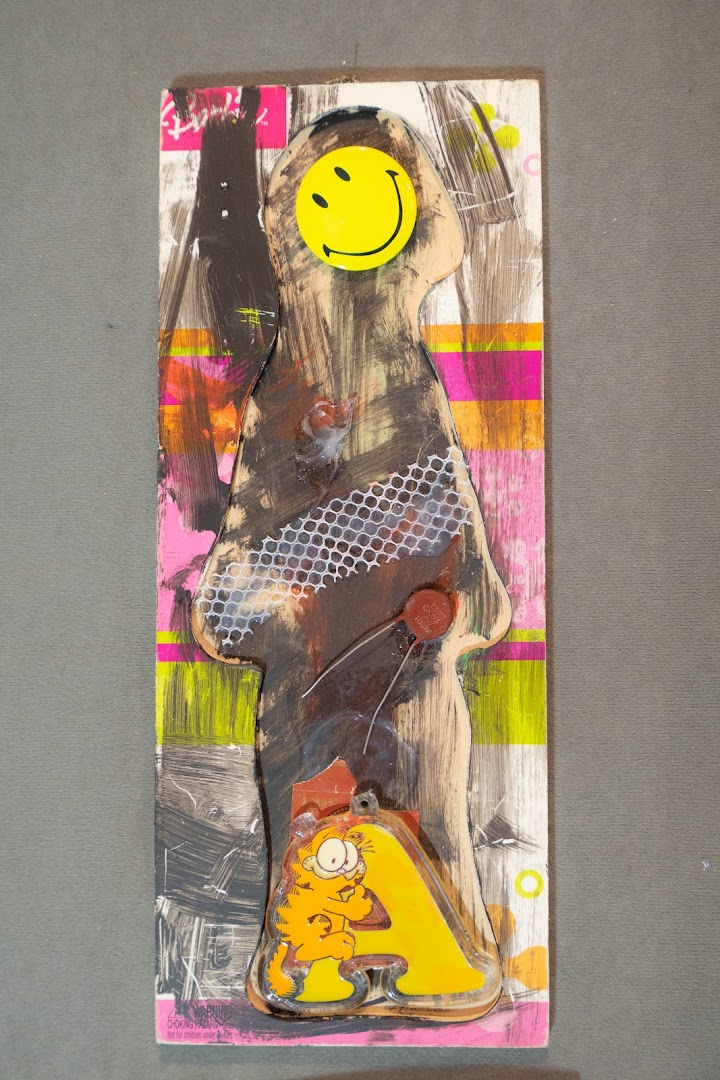 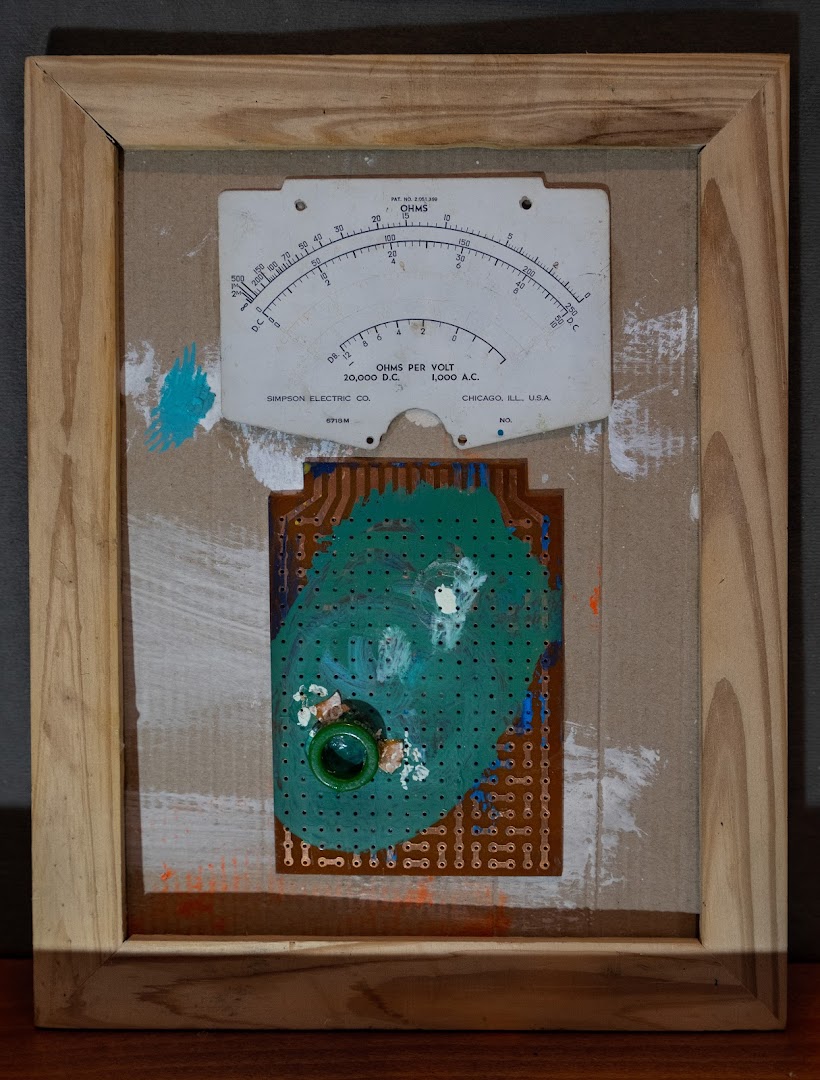 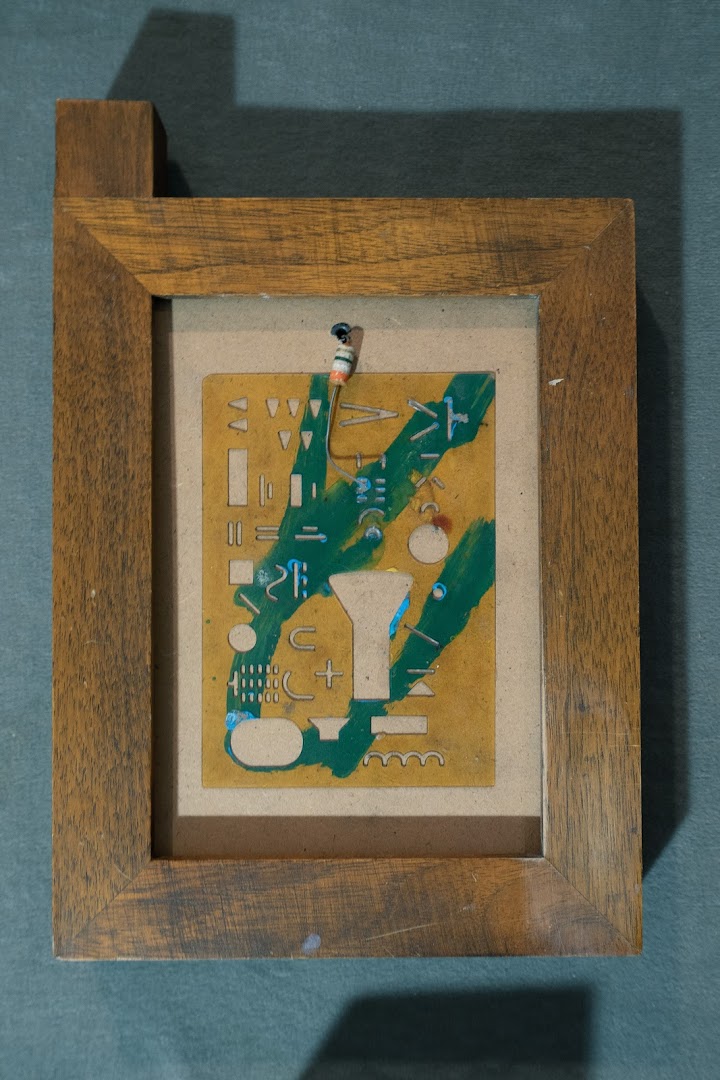 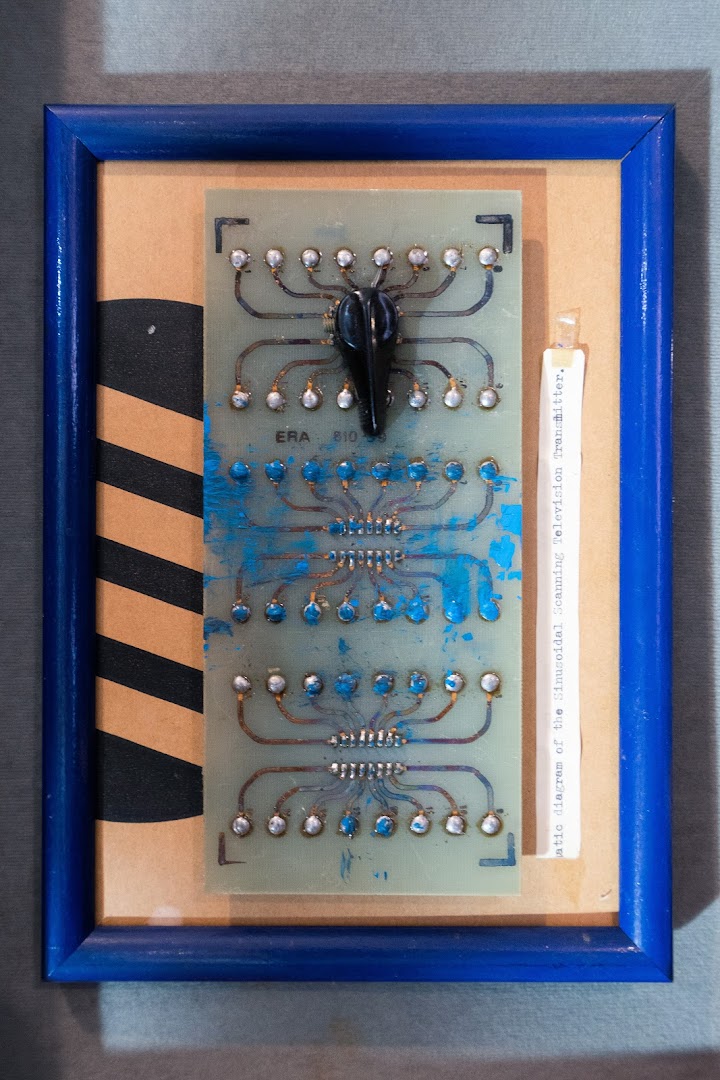 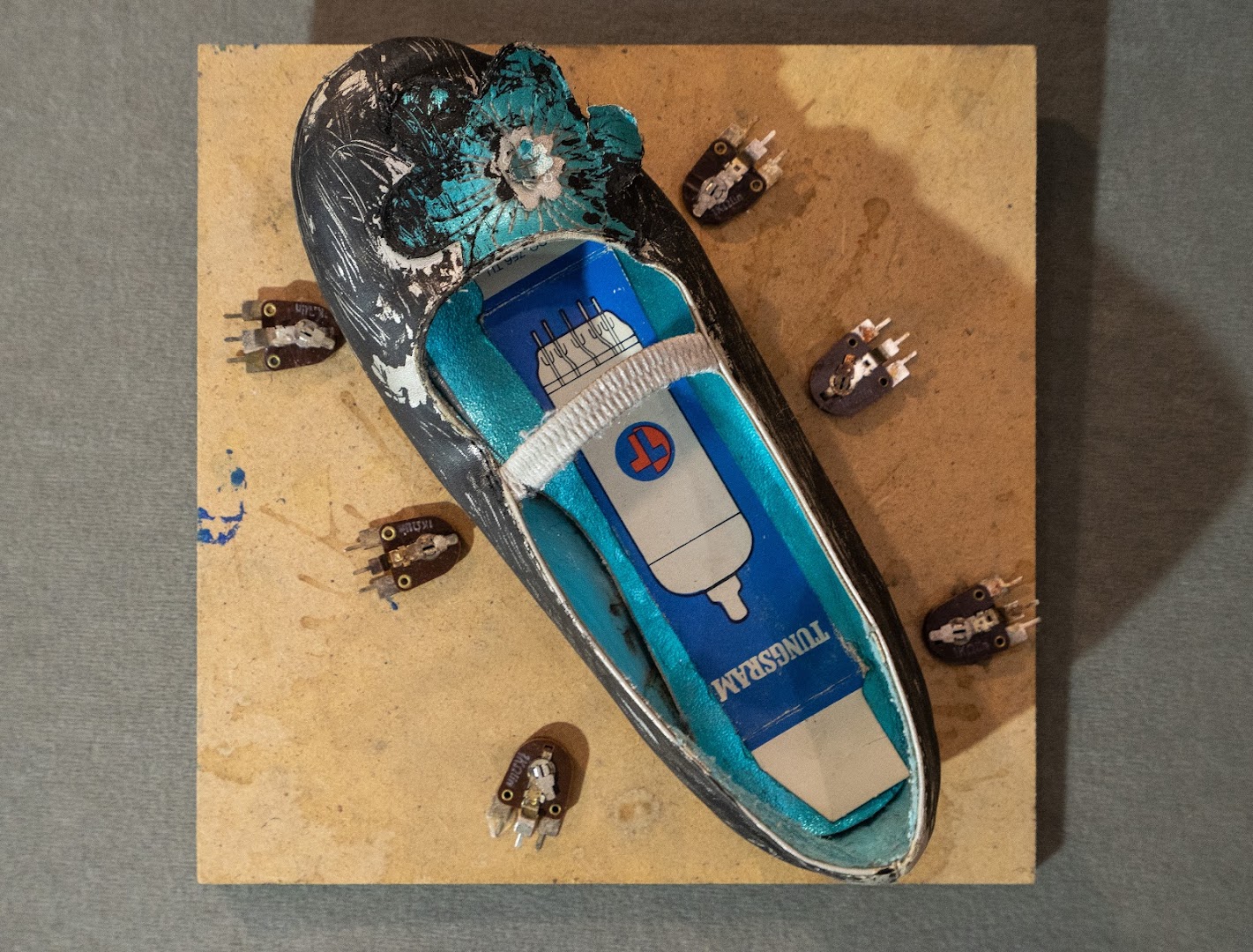 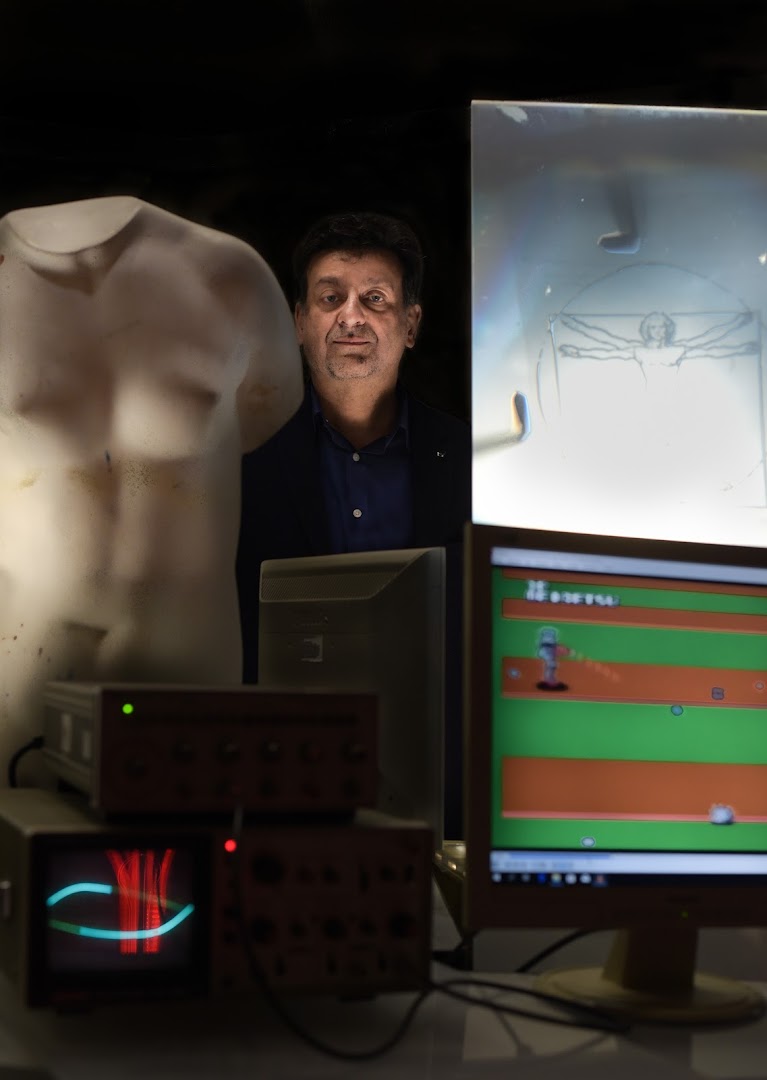 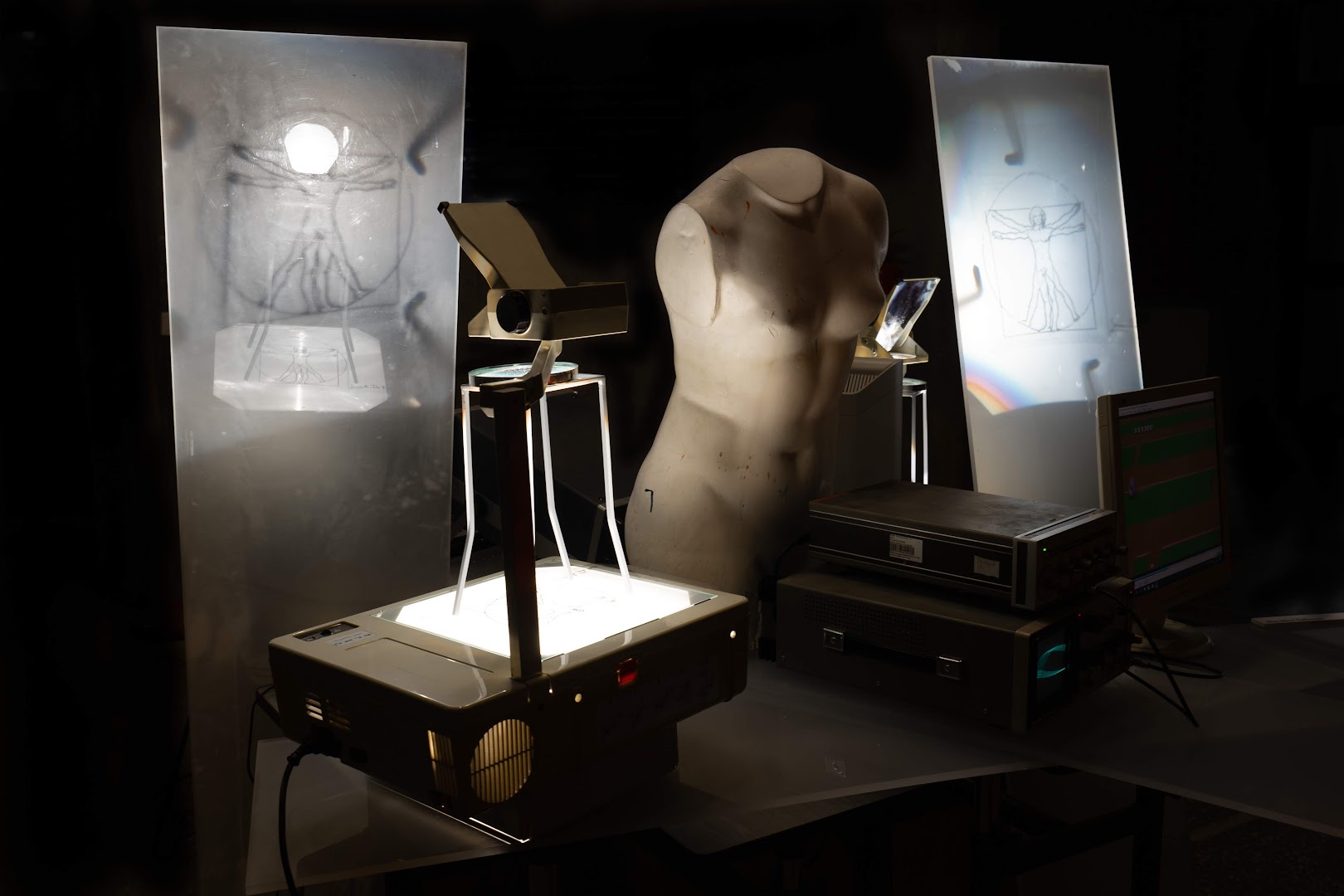 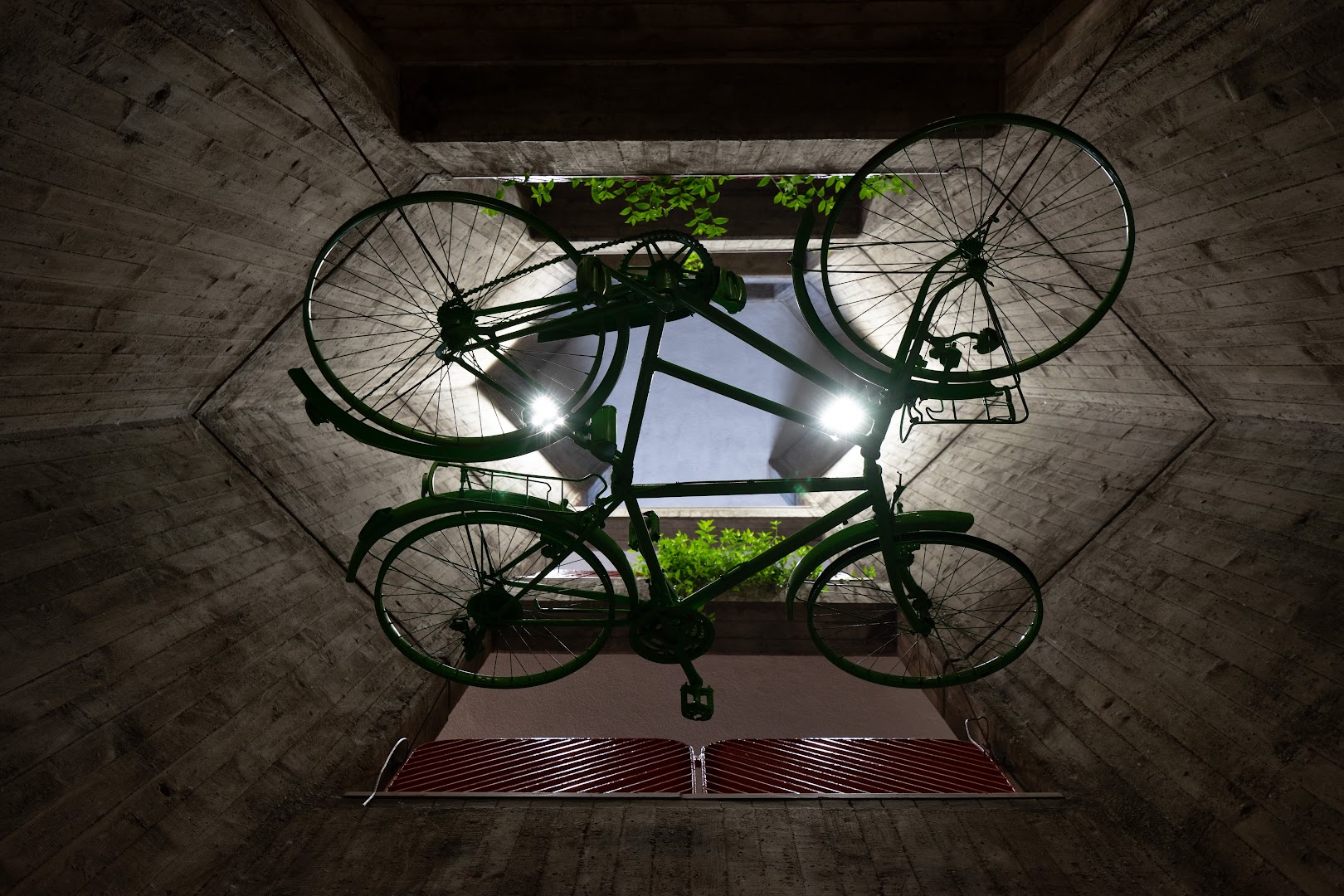 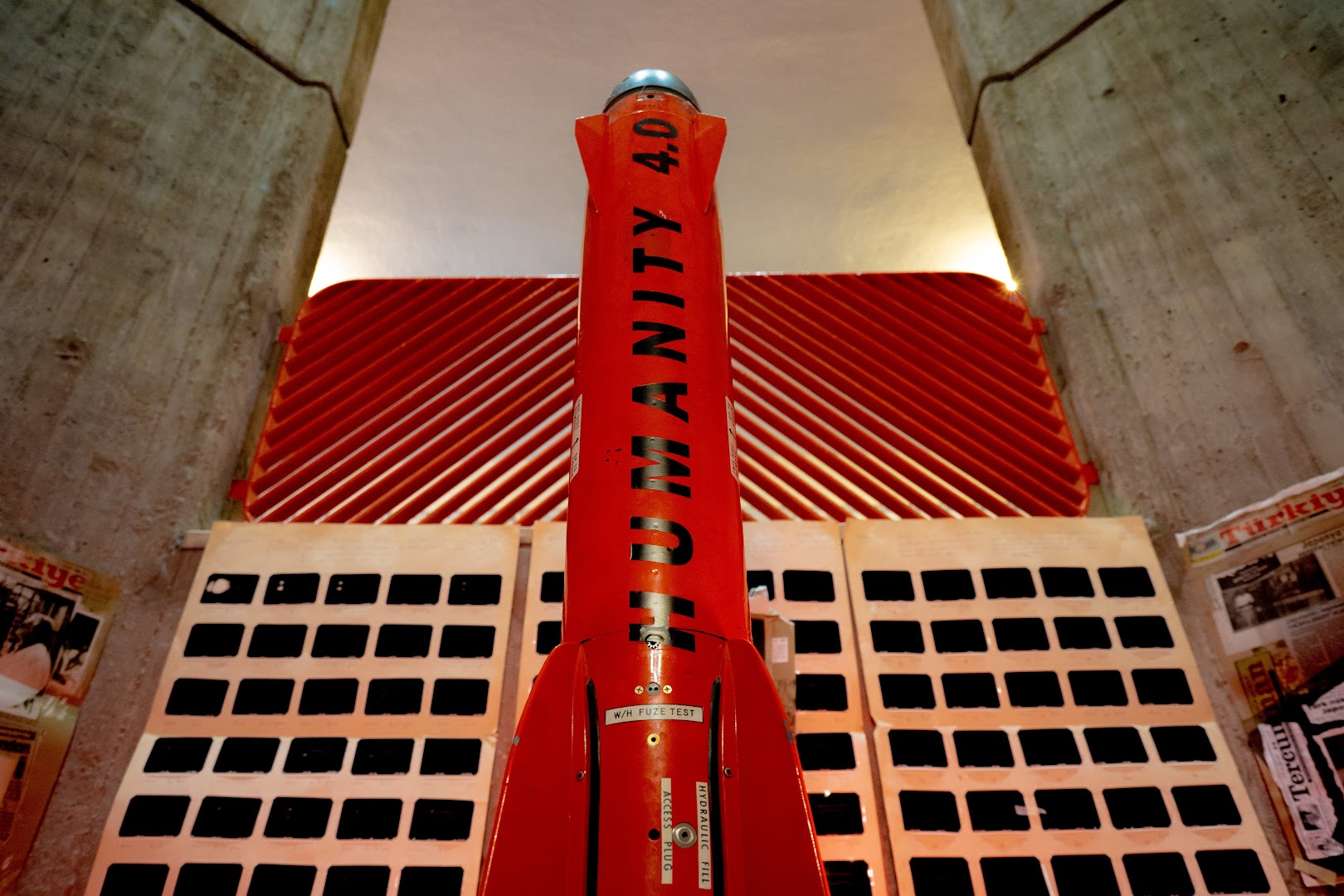 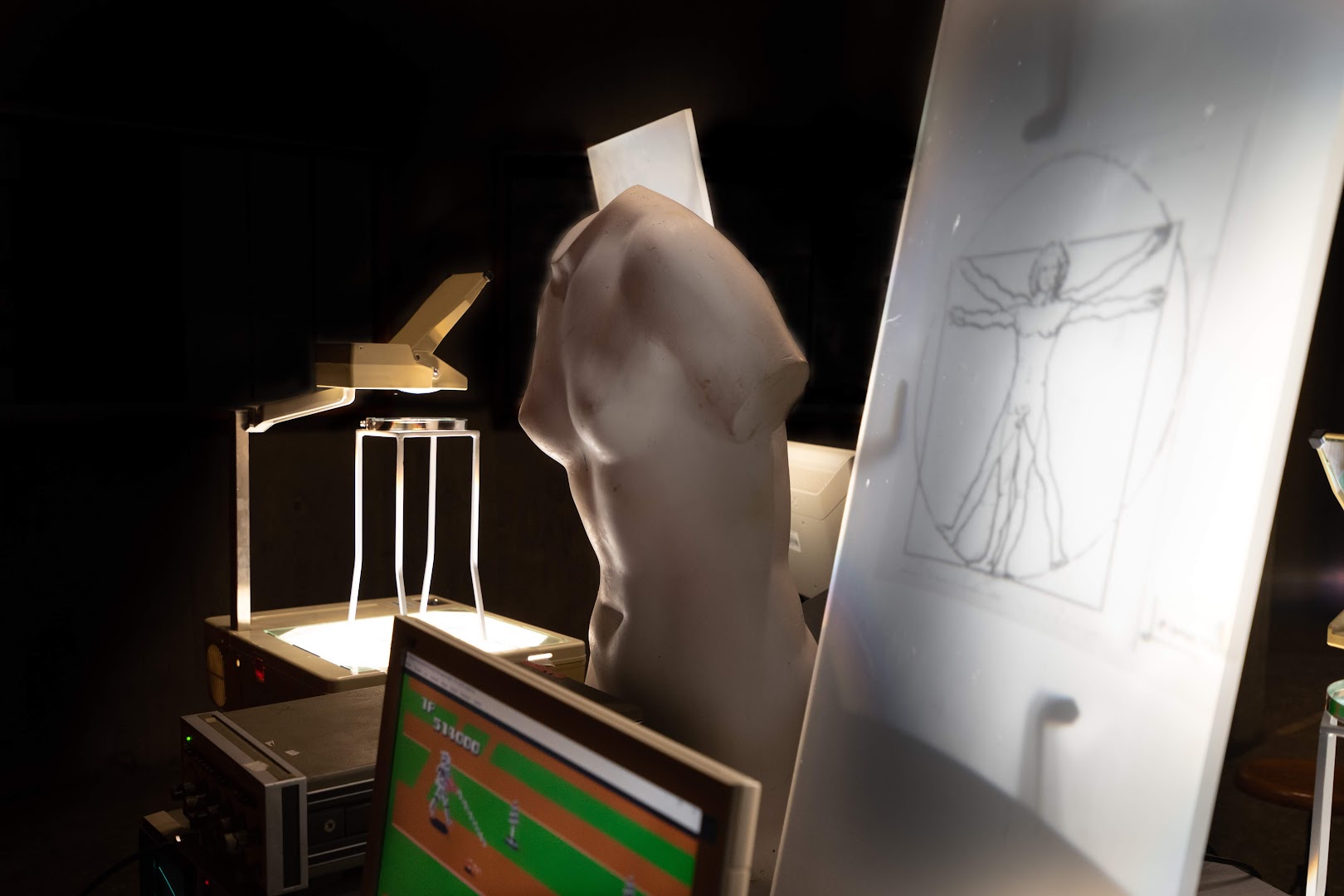 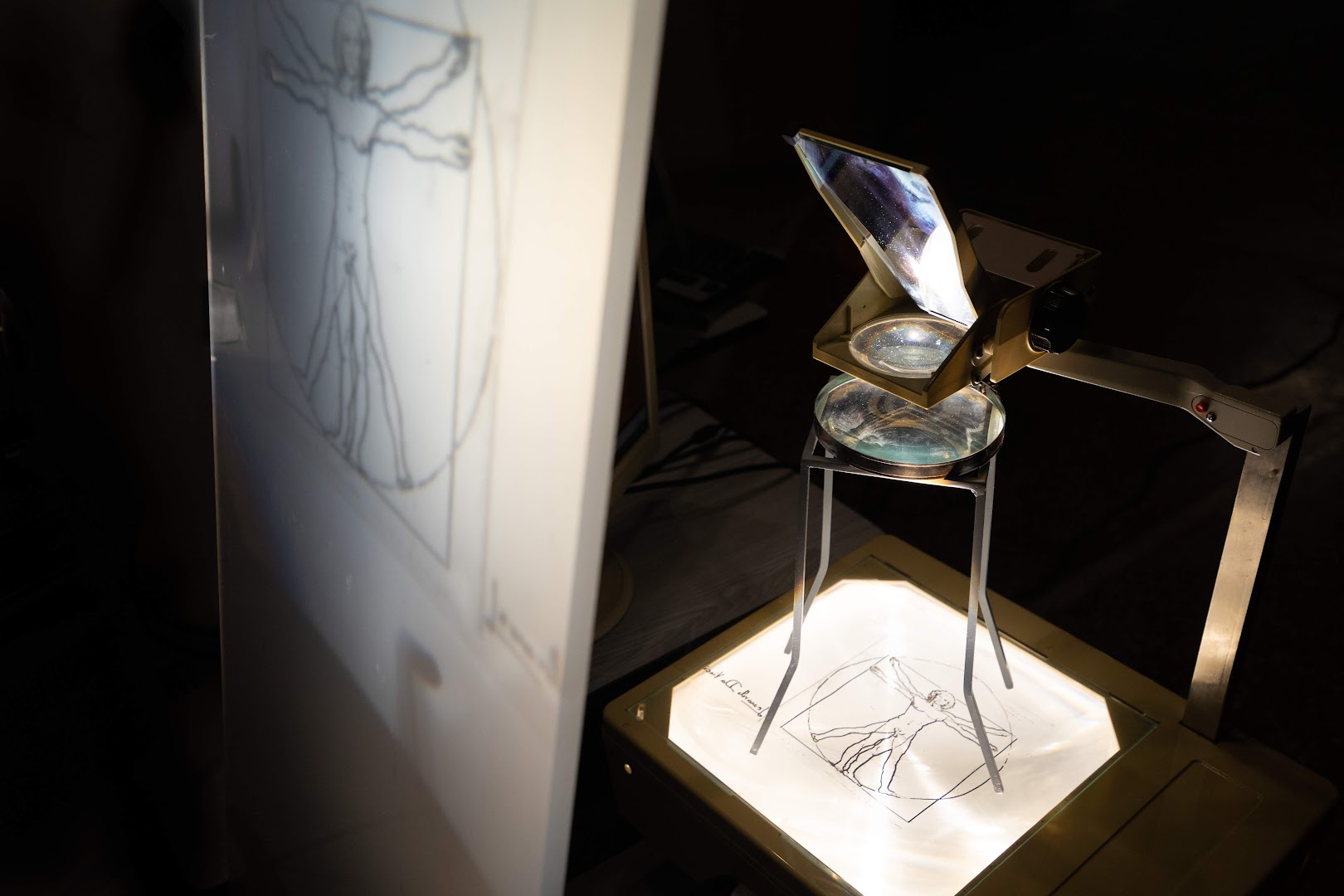 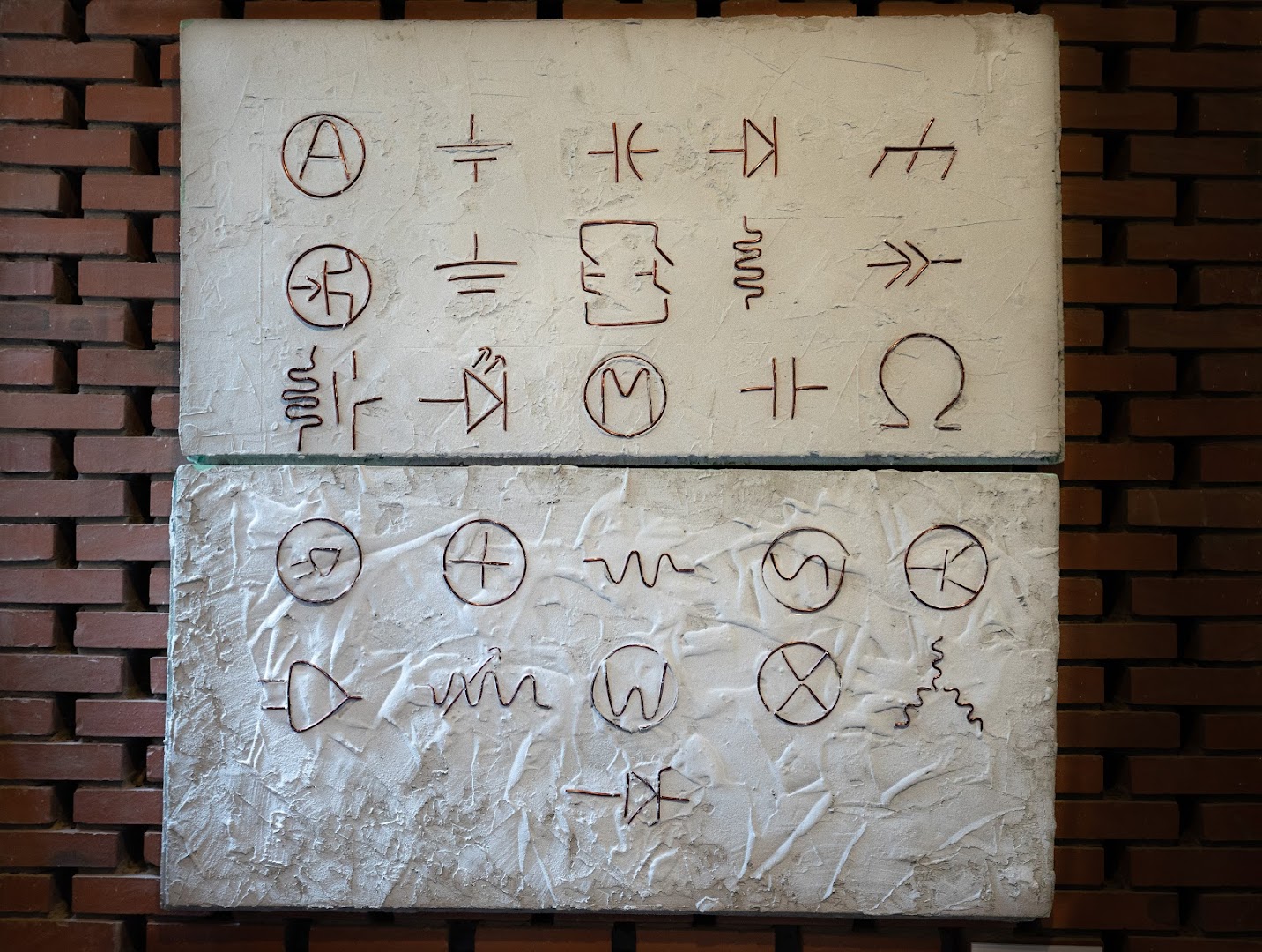 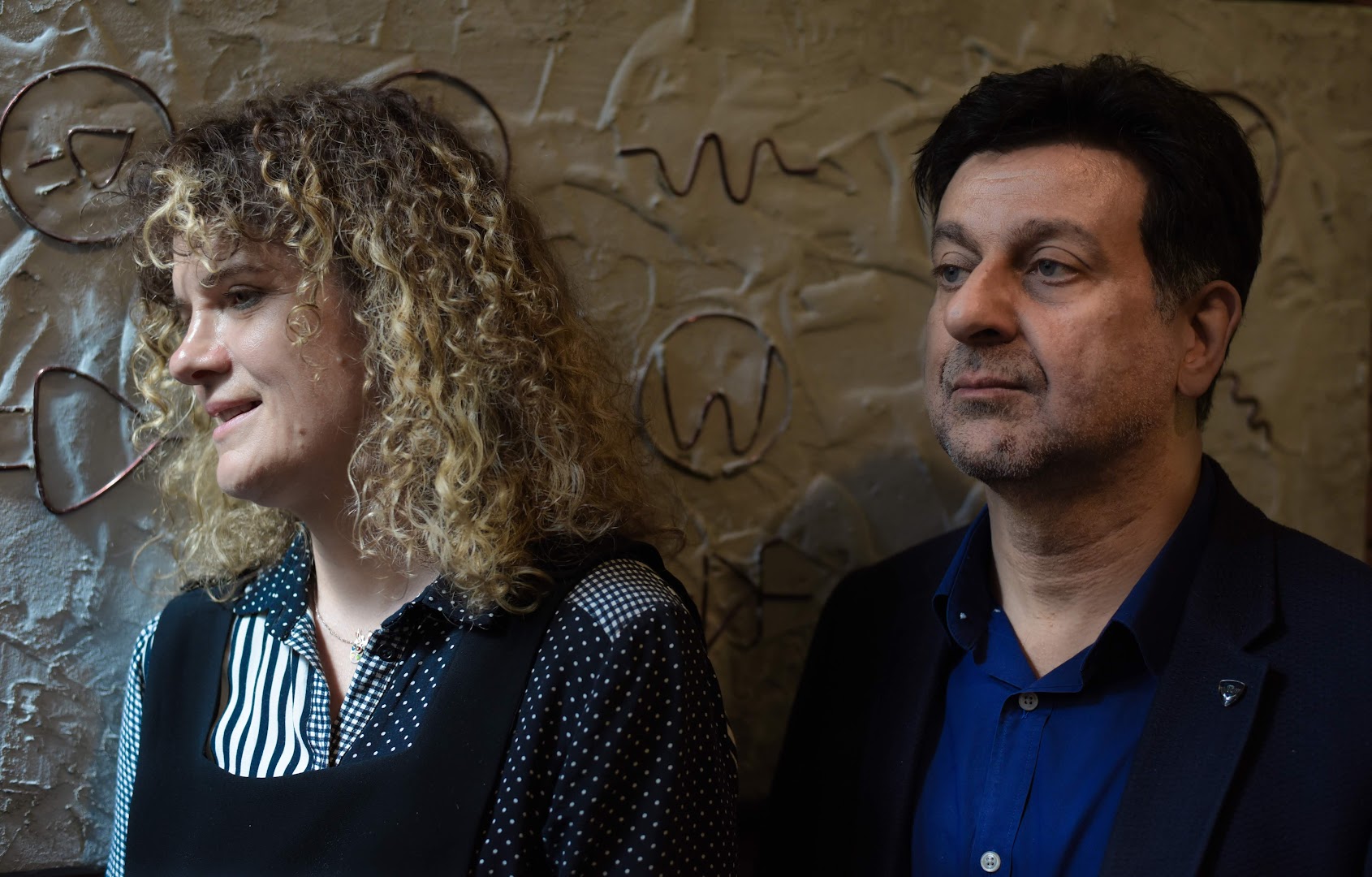 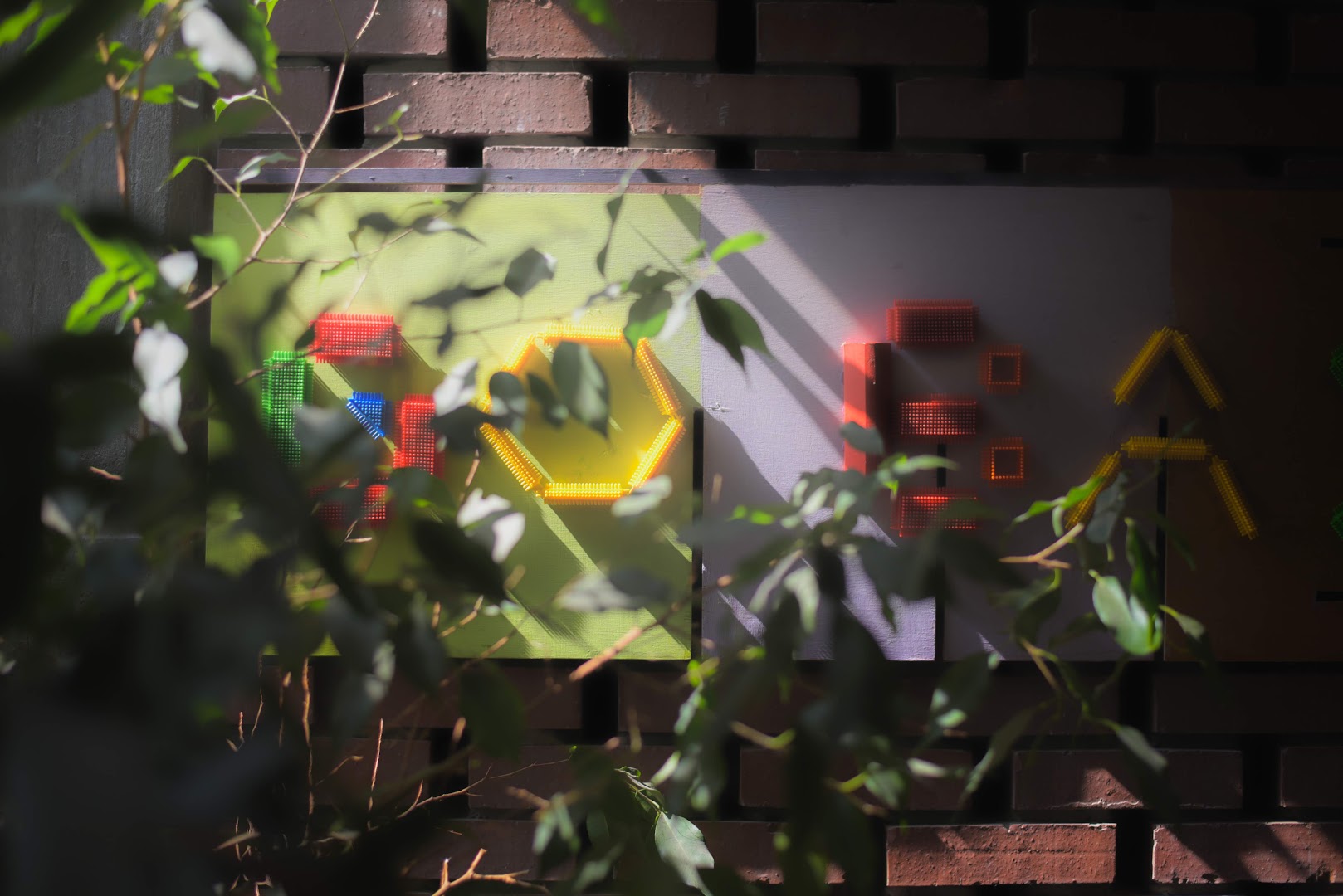