Our department had its first graduates in 1962. The number of graduates per year has increased from 25 to 200. 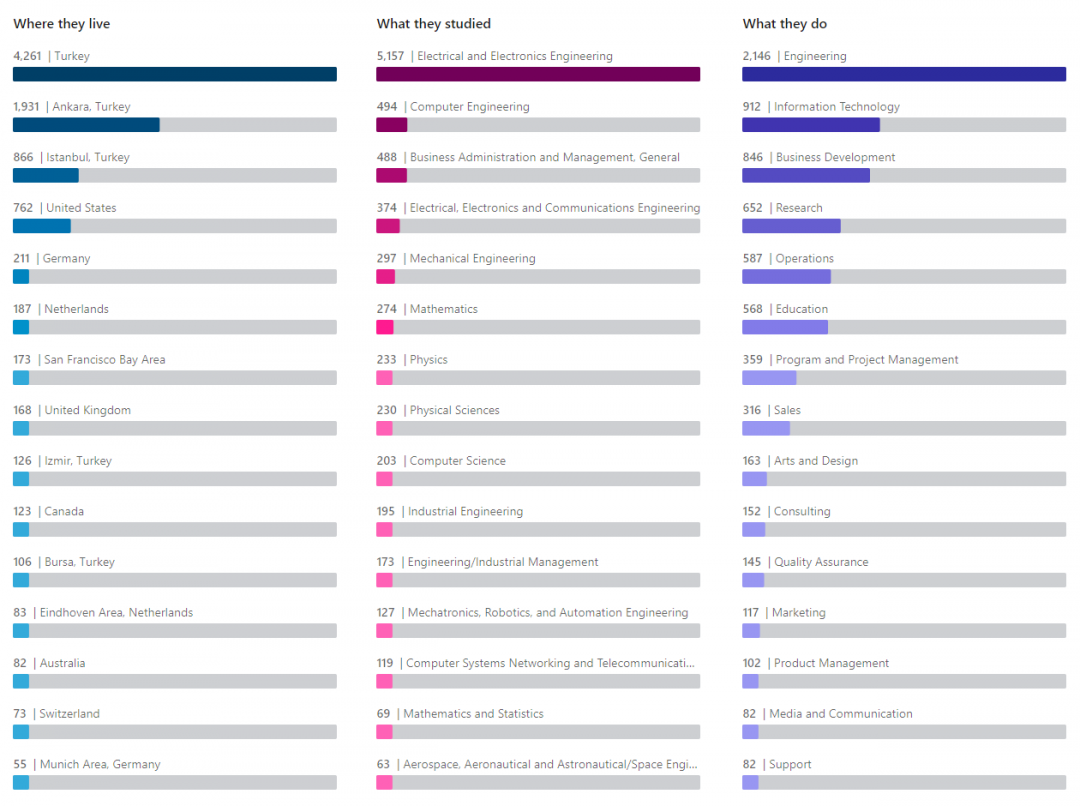 The results of the workplace survey conducted with the graduates of 2009-2013:

Mustafa Ergen is professor in İstanbul Technical University. Previously, Mustafa was Chief Advisor in Turk Telekom, and earlier he co-founded Silicon Valley startup WiChrous Inc. focusing 4G technologies and company is acquired by Tellabs [now Coriant]. He was earlier a National Semiconductor Fellow [now TI] at the University of California Berkeley, where he co-founded the Distributed Sensing Lab, focusing on statistical sensor intelligence and vehicular communication. Mustafa completed four programs from UC Berkeley; PhD and MS degrees in electrical engineering as valedictorian from ODTU. Prof. Ergen has more than 40 patent applications, many publications and authored three books: “Mobile Broadband” and “Multi-Carrier Digital Communications” are about wireless communications and published from Springer. Last one about entrepreneurship is titled “Girişimci Kapital: Silikon Vadisi Tarihi ve Startup Ekonomisi”, published by KUY where he is adjunct professor. He is also founder of venture funded Ambeent Inc. focusing 5G Wi-Fi and AI. METU culture has given me a lot, especially when I learned to make long-term plans and to work with a persistent focus.

In my first year at METU, at the spring festival, I bought a t-shirt with the words "METU is a lifestyle" on it. Although I could not fully grasp its meaning at that time, in the following years, especially after leaving METU, I understood what that single sentence meant, actually summarizing everything, by feeling down to my bone marrow. METU is indeed a way of life. He prepared me for the future by shaping me not only professionally but also in all areas of life. Whatever I know about living, whatever I think, I can say that I got its foundation in METU. At EE, even if I didn't learn anything, I learned mathematical thinking and gained the ability to solve problems. EE gave me confidence that I could understand and solve not only the questions on the exam but any engineering problem I might encounter in the future. In my professional life, which I overcame twenty years, I worked in a wide variety of fields, but I had no difficulty, I overcame all kinds of problems thanks to my METU-EE foundation. My suggestion to the new members of the METU family is that they should know the value of these beautiful years and use this environment offered to them to form both their life philosophy and professional knowledge. There is no other METU, no other EE!

My life at METU was a great milestone in changing my life. I got advanced academic knowledge, as well as improved my personal skills with many other facilities. The main purpose at METU is to teach you how to learn by yourself and put what you learn into practice, which are very distinguishing skills that you use in your professional and personal life. The years full of hard work in EEE, which comes from its more than 50-year broad experience, acknowledged expert academic stuff, and the spirit in METU, turn into unique values that you carry with you in your whole life. Necessarily, METU constitutes a great network in the academy and business. In business life, it is very easy to distinguish METU graduates with their point of view, know-how and thoughts. After graduation, I had a great desire to establish a start-up, Reengen, with my friends from EEE by putting our knowledge into practice. It is clear that METU-EEE gives you great privileges which you can feel every moment in your life.

I graduated from the EEE department in 2012 and the physics department in 2013. I am currently doing my Ph.D. in the field of particle astrophysics on the dark matter problem. Here, I am collecting the fruits of both my electronics and physics education at METU and I try to represent METU in the best way possible. I also miss the "Devrim" stadium.

I believe METU is the only university in Ankara that can provide a thorough university experience for its students. Along with its beautiful campus, accomplished departments - ranging from engineering to social sciences, contrary to the "technical" term in its name - and more than a hundred different clubs or societies to broaden horizons, METU has much to offer both academically and socially. METU-EE is no doubt an engineering department where students have to work harder than many of those at other departments. The EE education is intense: the theoretical background is vast and the practical training is strenuous. However, I think with all the hardships of four years of undergrad education at METU-EE, one learns how to do theoretical research, apply theory to practice and learn how to "learn" without someone having to teach you everything, which in my opinion should be one of the many important goals of university education. I completed Microwaves and Antennas & Telecommunications options and graduated from METU-EE in 2011. I have been working as a Sonar Systems Engineer at Aselsan for three years. I did not receive any formal training in underwater acoustics save for an acoustic wave theory grad course during my fourth semester as a grad student. When I first started working as a professional, I did not face any significant problems concerning the mostly alien field of sonar and underwater acoustics. I was able to comprehend the theory and apply it to practice effectively. Also, with the help of the senior design projects developed and completed before graduation, I was also able to understand some of the most important parts of the job of a systems engineer: requirement management and risk analysis. All in all, I think METU-EE equipped me well enough to face professional life after graduation.