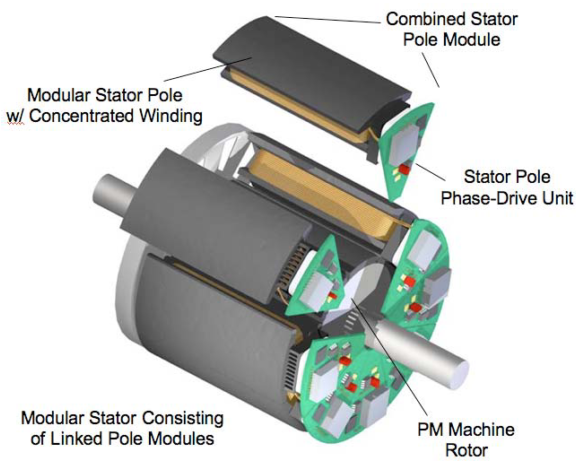 Nowadays, electric motors constitute more than 50% of the total electric consumption. Variable frequency drives (VFD) have become widespread in the industry. Moreover, electric vehicles are expected to be much more common in the next decade. Several control mechanisms which have been achieved via hydraulic systems are now being replaced by electromagnetic systems in the aerospace industry. In addition, sensitive servo drives are substituting for mechanical parts rapidly in the military defense industry. The electric motors are driven by separate drives from outside which are connected via long cables in all these applications. This leads to poor power density (W/kg, W/cm3) values. These applications also require high reliability, redundancy and drives with high fault tolerance.

The aim of this project is to develop an Integrated Modular Motor Drive (IMMD) system where the electric motor and its drive are integrated into a single package. Within this scope:

All the work within the context of this project are conducted in an open-source manner and can be accessed via https://github.com/mesutto/IMMD. Moreover, the project coordinator is a member of PowerLab research group the website of which is http://power.eee.metu.edu.tr/.

A PhD student is currently working in the project and we are looking for a full-time MSc. scholarship student. 10 undergraduate students are a part of this project with several topics who are performing METU EEE STAR (http://star.eee.metu.edu.tr/current-program/) program and are also members of the sub-research group called Research League (http://power.eee.metu.edu.tr/research-league/).