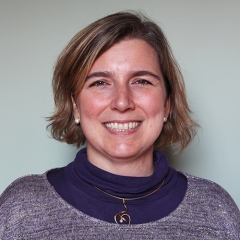 Lale Hayırlıoğlu Alatan was born in Ankara, Turkey in 1969. She graduated from TED Ankara College in 1986. She received the B.Sc., M.Sc. and Ph.D. degrees from the Middle East Technical University (METU), Ankara, Turkey in 1990,1993 and 1997, respectively all in Electrical Engineering. She was a post-doctoral visiting research associate at the Carnegie Mellon University, Pittsburgh between July 1997-June 1998. During her visit in the Electrical and Computer Engineering (ECE) Department, she worked with the CAD group on the interconnect analysis. Between July 1998-January 2000, she was visiting research associate at the ECE Department of the New Jersey Institute of Technology (NJIT). During her visit at NJIT her research efforts are concentrated on the design of microstrip antennas for Global Positioning System (GPS) applications and system engineering in the field of automated transportation. In February 2000, she turned back home and currently she is an Associate Professor at the Electrical and Electronics Engineering Department of METU. She is married to Aydın. She is the mother of twin boys Batu and Tuna.