Funded Personnel: Project will be conducted by 1 Ph.D. and 2 M.S. students 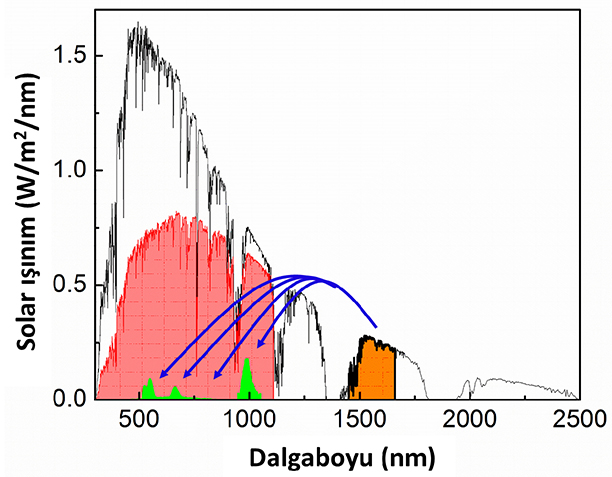 Today, over 90% of the solar cells are produced using silicon (Si) material. There are three main reasons for the choice of Si: its relatively low material cost thanks to being the second most earth-abundant element after oxygen, its near-to-ideal band gap, and the well-developed silicon technology that allows advanced fabrication processes. However, silicon solar cells similar to all other solar cells made of single band gap material suffers from two fundamental losses: (1) non-absorbed photons with energies below the band gap of the absorber, and (2) thermalization losses due to the absorption of photons with energies well-above the band gap of the absorber. These fundamental losses can be reduced by spectrum reshaping in which a high energy photon can be converted to two or multiple lower energy photons (down-conversion) and/or two or more low energy photons can be converted to one high energy photon (up-conversion).

"In this project, we aim at increasing the efficiency of bi-facial Si solar cells by reducing the energy losses due to non-absorbed photons." said Selçuk Yerci to summarize the aim of the project. "In this study, first, we will fabricate bi-facial Si solar cells for the first time in Turkey. Next, we will fabricate up-conversion layer at the back of the bi-facial solar cells. Finally, the up-conversion efficiency of the up-converting layer will be enhanced using various photonic structures."

Other than Asst. Prof. Selcuk Yerci, Prof. Rasit Turan, the director of GUNAM, Assoc. Prof. Ipek Kocer Guler from Cankaya University and Assoc. Prof. Sahin Kaya Ozdemir, a former graduate of EEMB (M.S. 1995 and B.S. 1992), from University of Washington at St. Louis will work as co-PI in the project.

At the moment, 2 undergraduate students are working along the direction of this topic in their STAR project. We are seeking for motivated M.S. and Ph.D. students to join our team.